High time resolution chemical characterization of submicron particles was carried out in the South American city of Santiago de Chile using the Aerosol Chemical Speciation Monitor (ACSM). The instrumentation operated for 100 days from August 17th to November 23rd 2011 in an urban station located inside the University of Santiago de Chile (USACH) campus. In addition, a semi-continuous OC/EC analyzer was also run in parallel with the ACSM for some of this time. Meteorological conditions varied along the studied period due to the transition from winter to spring time. Atmospheric temperature inversions were responsible for hourly average sub-micron particulate matter levels of up to 80 μg/m3, especially during the night time. The average submicron particle mass concentration (± standard deviation) for the whole period was 29.8 ± 25 μg/m3. Aerosol particles were composed mainly of organics 59%, followed by nitrate, ammonium, sulfate, black carbon and chloride with contributions of 14, 12, 8, 3 and 3%, respectively. Using positive matrix factorization, the organic fraction was divided into four distinct types of organic aerosol representing fresh automobile exhaust, biomass burning, and two oxygenated organic aerosol factors with different oxidation states. The transition from winter to spring was clearly seen in the composition of OA. The emissions from primary sources, such as vehicle and biomass burning, decreased in the period leading to spring, whereas the amount of oxygenated organic aerosol increased over the same time. This study shows that high time resolution measurements of aerosol chemical composition can lead to better characterizations of the evolution and sources of pollutants in an urban atmosphere. Effects of Dust Event Days on Influenza: Evidence from Arid Environments in Lanzhou 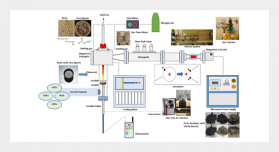