The IIT Kanpur Fog Chamber Facility has been conceptualized and built indigenously to study the fog formation and dissipation under various environmental conditions. The chamber has been designed such that all governing parameters can be controlled and optimized. The effects of relative humidity, temperature and size distribution, number and chemical composition of fog condensation nuclei (FCN) on the formation, stability and dissipation of fog has been studied. The visibility measurements were carried out using a He-Ne 632.8 nm monochromatic laser. It was found that aerosol number concentration, size distribution and chemical nature of FCN have significant effects on visibility reduction in fog. Direct comparisons were made for theoretical droplet growth and settling times in predicting the period for which stable fog was expected Vs the actual experimentally measured times for stable fog generated using different types of FCN. Effective radius, Reff, of fog droplet size distribution (DSD), a parameter that describes the optical properties of the droplet distribution was also calculated. It was noted that even for the same Reff (i.e. similar visibility), DSDs show notable differences depending on other conditions, implying the differences in the microphysical nature of fog. Fog dissipation results show that, with the decrease in temperature, the rate of fog dissipation decreases for all FCNs except for uncoated graphite, where no particular pattern has been observed maybe due to its less hygroscopic nature. The results from this study will help us in better understanding the optical nature of fog and designing of future fog vision devices. 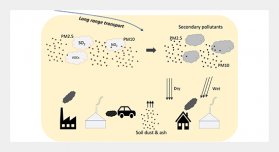