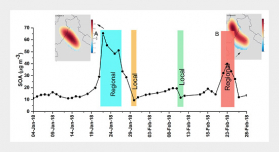 Insights into the Regional Transport and Local Formation of Secondary Organic Aerosol in Delhi, India