An investigation of the particle deposition velocity (vd) onto an upward moving 300 mm (dw) wafer in a cleanroom with a 0.3 m/s downward velocity (vo) was performed by the dynamic mesh model of FLUENT CFD code. The results show that the air simultaneously replenishes the vacant space induced by the movement of the wafer and new recirculation zones were formed around the wafer. These phenomena are apparently different from those of the wafer fixed (free-standing) in the flowing fluids. Compared with a free-standing wafer, the particle deposition velocity on a moving wafer was increased significantly. The deposition velocity increases with the increase of wafer moving velocity (vb). When the dimensionless moving velocity of the wafer Vb (= vb/vo) was 0.3, 1.0, and 3.3, the time averaged (over the dimensionless time τ (= tvo/dw) from 0 to 1.0) particle deposition velocity of particles with diameter of 0.1 μm was 11.4%, 20.8% and 37.8% greater than that of a free-standing wafer (vfs), respectively. In the computing range, the mean vd can be estimated by an equation of vd = vfs (0.208 Vb1/2 + 1.0). 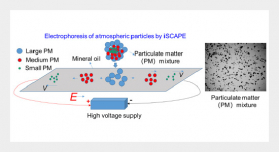