Source apportionment of total suspended particulate matter (TSPM) and associated heavy metals has been carried out for the city of Delhi using the Chemical Mass Balance Model, Version 8 (CMB8), as well as principle component analysis (PCA) of SPSS (Varimax Rotated Factor Matrix method) in coarse- and fine-size mode. Urban particles were collected using a five-stage impactor at six sites in the winter of 2005-06. The impactor segregates the TSPM into five different size ranges (viz. > 10.9, 10.9–5.4, 5.4–1.6, 1.6–0.7 and < 0.7 µm). Four samples were collected from six different sites every 24 hours. Samples were analyzed in five size ranges gravimetrically and chemically for the estimation of SPM and metals. The five different size ranges were divided into two broad categories: coarse (1.6 to > 10.9 µm) and fine (< 1.6 µm). The CMB8 and PCA were executed separately for both coarse and fine size ranges. Results obtained by CMB8 indicate the dominance of vehicular pollutants (62%), followed by crustal dust (35%) in the fine size range; while in the coarse size range crustal dust dominated (64%) over vehicular pollution (29%). Little contribution from paved-road dust and industrial sources was observed. Results of PCA (or factor analysis) reveal two major sources (vehicular and crustal re-suspension) in both coarse and fine size ranges. The correlations of factors (sources) with the metals show that in the coarse size range the dominant source is crustal re-suspension (68%) followed by vehicular pollution (23%). However, this is reversed in the case of the fine size range factor analysis where vehicular pollution (86%) dominated over crustal re-suspension (10%). 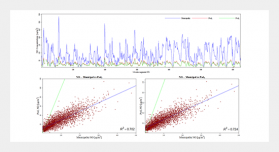