This paper deals with atmospheric concentrations of SPM (Suspended Particulate Matter) and its water soluble components, their size distribution, and seasonal and spatial variations. Ambient aerosol samples were collected over tropical India at an urban and suburban site in the Agra region. All samples were collected on Whatman-41 filters using a CPS-105 size-segregated impactor. The mean concentration of SPM was 154 μg/m3 with approximately 55% in coarse mode at Dayalbagh and 228.9 μg/m3 at St. John’s with approximately 41% in coarse mode. The concentration of NH4+ was highest at both sites, followed by Mg2+ > Ca2+ > SO42- > Cl- > K+ > NO3- > Na+ > F- at Dayalbagh, and Mg2+ > Cl- > Ca2+ > SO42- > NO3- > F- > Na+ > K+ at St. John’s. The difference between the sums of cations and anions in fine mode was 181.5 and 77.06 neq/m3 at Dayalbagh and St. John’s, respectively; and in coarse mode, 172.76 and 82.49 neq/m3 respectively. The mass size distribution of particulate showed bimodal distribution at both the sites with one peak in the fine mode and another peak in the coarse mode. Unimodal distribution was observed for F-, NO3- and Na+ and bimodal for K+, Ca2+, Mg2+, NH4+, Cl-, and SO42- at both sites. The mean load of SPM was highest in monsoon followed by summer and winter, probably due to high wind speed, unstable atmospheric conditions and minimum rainfall during the study period. 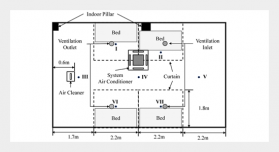